As you know I SPY CIGARS is carrying the 5 Vegas lines of Cigars. 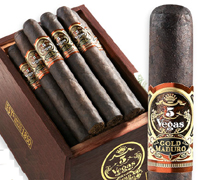 We are big fans of 5 Vegas here at I SPY CIGARS – their lines are consistent in construction and flavor, and they are always available at an exceptional value. We’ve bought and enjoyed boxes of the Classic and the Gold, and also enjoyed the Series A. So, when the Gold Maduro was released, we hopped at the chance to split a sampler – the filler is the same as that found in the Gold line, which is the best selling cigar within the 5 Vegas lineup. The stick utilizes a Pennsylvania Broadleaf, which we were also excited about. Most people are accustomed to finding Pennsylvania Broadleaf wrappers on powerhouse smokes, such as the, 5 Vegas AAA, and the La Herencia Cubana Oscuro, among others. The 5 Vegas Gold Maduro presents a less powerful version, allowing milder smokers to enjoy this excellently flavored wrapper.
Nestor Plasencia and the folks behind 5 Vegas have been working on the Gold Maduro blend for nearly five years. The Plasencia family grows around 3,400 acres every year, spread across Panama, Costa Rica, Nicaragua, and Honduras, and has worked with each of the 5 Vegas line of cigars.
We’re excited about this one, so let’s get to the review.

The dark maduro wrapper is consistently colored from head to foot and has an excellent touch with no soft spots – the darkness and consistency of color made the wrapper seam dyed, but it is in fact just a great looking and well colored wrapper. The black, copper, and gold band was an excellent choice and pops off the maduro wrapper. The aroma is very pleasant, with a sweet cocoa aroma that only increases toward the foot. There are also some black cherry notes alongside a mild nuttiness. On the draw, it reveals an appropriate resistance with flavors that do not stray from the aroma.

Construction : I give it 4.6 out of 5
The veins are minimal and hard to notice on the dark wrapper, and the seams are well rolled. There is some definite texture to the Gold Maduro, with a rough, dry exterior and some bumps beneath the wrapper, causing it to rise in several spots. The cap is fine, but cut nicely. The foot was perfect and easy to toast. Used a cedar spill to toast and light.

Flavor : I give it 4.85 out of 5
The aroma is very pleasant, with a sweet cocoa aroma that only increases toward the foot. There are also some black cherry and black raspberry, notes alongside a mild nuttiness of chestnut. On the draw, it reveals an appropriate resistance with flavors that do not stray from the aroma.

On the light, the aroma is very pleasing, with a sweet berry and thick tobacco. It lights quick and a good pull gets it started evenly.
These flavors provide a steady introduction into the first third, which does not vary much from the initial few puffs. The Gold Maduro has a dry texture to it, causing the flavors to separate from each other, rather than creating a creamy, united core. Moving into the second third, a bit of the dryness fades a mild creaminess compliments the continued cocoa. Along the edges some barnyard notes arrive, mostly of dry hay. Closing out the smoke, the final third does not provide much transition, as this is not a shifty or complex smoke. The primary notes continue to be creamy, as the second third was, and are more gentle than before.
The draw proves to be loose, presenting a likewise loose ash and quick burn. The ash is evenly colored and the burn line is consistent throughout, all while maintaining a cool burn.


Value : I give it 4.88 out of 5
This one fits it market perfectly.
Overall Rating : 5 out of 5
This was a good cigar with great complexity and balance.
The construction was decent and the flavor profile was enjoyable.  I’ve enjoyed this line of cigars, especially for the value. The Gold Maduro is no different, coming in at under $4 a stick. I would recommend this cigar as a box purchase, especially if you frequently entertain guests that are not frequent smokers – they’ll enjoy this one.

http://ISPYCIGARS.com
Posted by Unknown at 5:04 PM